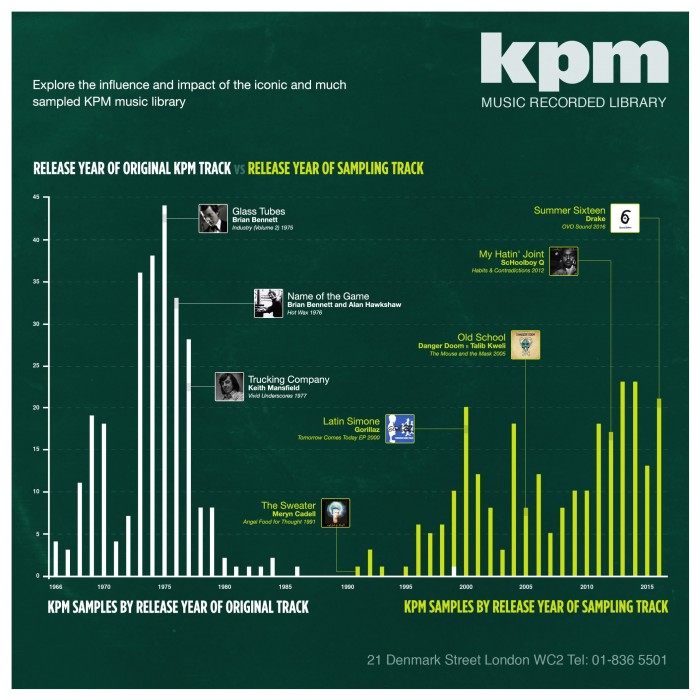 Explore the Influence of KPM with WhoSampled

This fun project is something I’ve been working on with WhoSampled and EMI for the last month or so. Blurb from WhoSampled:

“An acronym for its founding fathers ‘Keith-Prowse-Maurice’, KPM is a label with a storied history which dates all the way back to the 1870 when instrument maker Robert Keith opened a small music shop in London. Expanding, merging and re-inventing itself over the following 80+ years, the 1950s saw KPM start to produce music for film, radio and the emerging commercial TV market. Shortly after, the now highly collectible green sleeve ‘KPM 1000 series’ records went into production. 1960s to 1980s proved to be KPM’s glory years and the 1000 series records defined the sound of the era, spawning dozens of popular TV themes of the day. These fantastic records might have become forgotten footnotes in music history however were it not for their discovery and appropriation by a new generation of diggers and music makers in search of rare grooves and unique sample material.

In celebration of this rich legacy, KPM has recently made the entirety of the coveted 1000 series recordings available digitally for the first time. In support, WhoSampled has teamed up with KPM to produce this infographic documenting the label’s influence on contemporary music.”