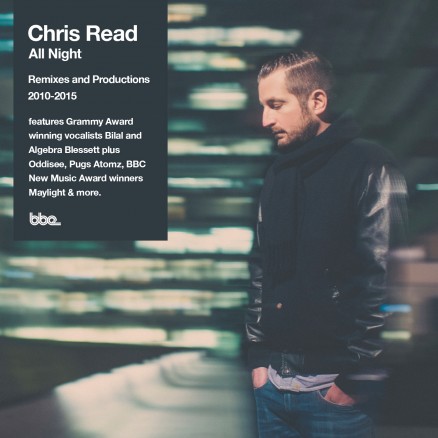 From the BBE press release:

“London based DJ and producer Chris Read has been a fixture here at BBE now for over five years, a period during which he has put his hand to no fewer than four BBE compilations, including his spectacular round-up of the label’s finest moments, BBE 15: Real Music For Real People and the critically acclaimed Latin Concrete (‘album of the week’ in UK broadsheet The Independent). During that period Chris has applied his touch to numerous BBE mixtapes and remixes, collaborating with BBE artists DJ Spinna and YesKing among many others.

The gloriously eclectic ‘All Night’ rounds up the best of his BBE remixes, placing them alongside productions and remixes for a stellar catalogue of guest vocalists and labels. Two Grammy award winners feature, Bilal and Algebra Blessett, Bilal having previously collaborated with heavyweights J-Dilla, Dr. Dre and Robert Glasper, while Atlanta-native Blessett has impressed as one of the most innovative performers in R&B. Also on hand are DC hip-hop man of the moment Oddisee, Tokyo Dawn-signing Pugs Atomz, Wah Wah 45s’ Bev Lee Harling, Mozambiquan hip-hop renaissance men Simba & Milton Gulli, long time collaborator and Tru-Thoughts vocalist Lizzy Parks and the mighty horns of the Renegade Brass Band. Of the 14 tracks featured, nine are exclusive to this compilation or previously unreleased. Notably, this album is the first to showcase material from Maylight, a BBC New Music Award winning seven-piece fusing soul, jazz and electronics, Chris having produced the band’s debut LP Almighty (due for release on BBE later in 2015). Other high points include a taster of material from Chris’s forthcoming full length collab with Chicago born Pugs Atomz and brand new instrumental material including ‘Stop Playing (With My Soul)’, a track constructed entirely from samples mined from the catalogue of library-music giant Boosey & Hawkes.”