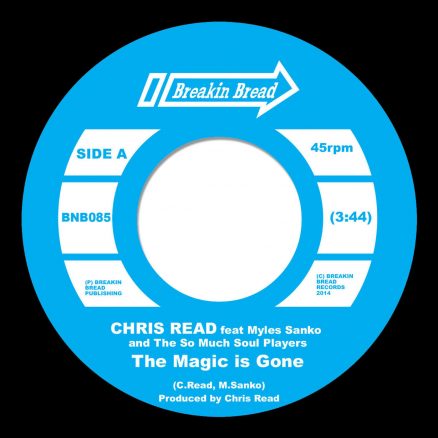 Info from the Breakin Bread press release below:

“Chris Read returns on Breakin Bread with a slice of uptempo vocal funk dancefloor magic. This is Chris’s fifth 7inch single for the label. Ever exploring new territory and showing his versatility, Chris follows his 2013 throwback rap smash ‘Rap Tradition‘ with a pacey Hammond funk number aimed squarely at the dancefloor. The latest offering taken from Chris’s forthcoming long player ‘Small Steps’, we expect big things from ‘Magic is Gone’.”

Side A “The Magic Is Gone”

“A gritty funk number full of live energy, this track showcases the growth of Chris Read as more than just a producer. Featuring Speedometer vocalist Myles Sanko, ‘Magic Is Gone’ delivers a soulful vocal over an energetic drum break underpinned with a funky b-line and topped with catchy horns, memorable guitar licks and a killer Hammond solo courtesy of collaborators The So Much Soul Players* (named after Chris’s London contemporary Funk & Soul night).”

Side AA “The Magic Is Gone – Hammond Reprise”

“In what is now becoming a Breakin Bread tradition and a nod to many classic 7″s of yesteryear, the flipside features an instrumental edit. The ‘Hammond Reprise’ follows in the footsteps of the A-Side, replacing Myle’s soulful vocal with the throaty Hammond which dominates the second half of the original version to create a full pace Hammond work out, topped with crowd rousing vocal ad-libs.

*The So Much Soul Players are a collection of musicians with whom Chris has collaborated on other recording projects brought together for this release and include Rob Barron on Keys, Giles Barratt on guitar and Joe Egan on horns.”