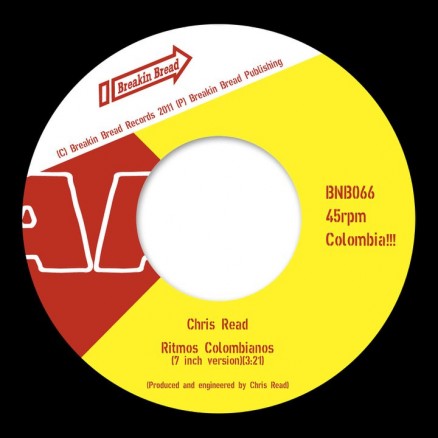 Side A: Disco Cumbia

” ‘Disco Cumbia’ is disco tempo cut of Latin flavour to get the crowd going. Effortlessly fusing funky hard hitting disco drums with Cumbia rhythms and a touch of Batacuda, the track delivers the atmosphere of the street party with a distinctly traditional vibe. A captivating bass groove, catchy vocal hooks, attention grabbing horns and the underlying sound of the carnival spirit make this a well rounded fusion of traditional and modern Latin styles.”

Side B: Ritmos Colombianos

“Neatly complimenting its A Side counterpart, ‘Ritmos Colombianos’ takes a similar Cumbia backdrop and applies it to a loose drum heavy mid-tempo B-Boy rhythm that is no less effective on the dancefloor. Again utilising the bass groove as its driving force, carnival whistles, funky brush drums and horn stabs all make an appearance in the mix. A regular appearance in Chris’s DJ sets for the last year, this track has tried and tested dancefloor credentials.”