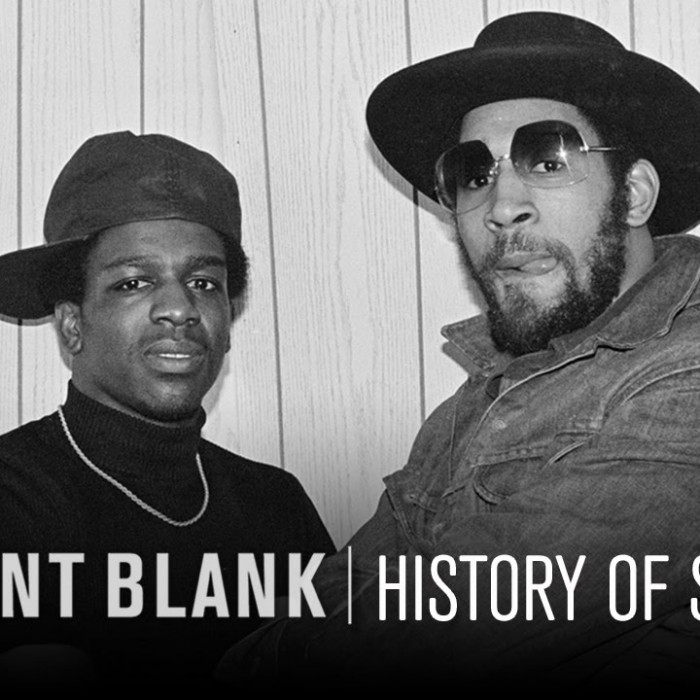 As a quick follow up to the video of my ‘History of Sampling’ video I posted earlier this week, I thought it might be useful to put together some foot notes to provide links for anyone wanting to explore a bit more on the topic, listen to the tracks I reference in full and  to explain in a little extra detail some of the points I talk about and to answer some of the questions I’ve been asked since the video went live. Links and info timed to the video below:

0:26 From Beethoven to Beyonce

You can chart the connection between any two artists using WhoSampled’s ‘Six Degrees’ search engine. Beethoven and Beyonce are actually connected by just two degrees of separation.

0:30 Explore hundreds of thousands of artists

No disrespect to any of the artists mentioned intended here obviously – many great records are based on a simple loop and good sense of occasion – just a light hearted look at a quirky example of a chain of connections. Listen to those tracks / explore those connections on WhoSampled here and here.

This was something I mentioned because it makes a good example of a longer chain of connections, but was something that came to my attention because it was the subject of a Duke Law lecture back in 2008. You can read more about that here. I incorrectly stated that the origin of that chain of connections was a traditional work song, but was in fact a traditional spiritual, a type of song belonging to a similar cultural backdrop, but different in nature.

2:51 Evolution of music via Imitation and Citation

Most of what’s shown on the slide here is pretty self explanatory. Jazz being influenced by the USA’s immigrant populations however could be seen as a bit vague and the terminology arguably not entirely appropriate. There’s a great concise explanation of Jazz’s origins on the Jazz in America website.

The map shown on the slide isn’t really visible in the video, but you can explore the interactive map on the Thompson site here.

The date of the Mozart piece was in fact 1823 rather than 1820. You can listen to both pieces of music on WhoSampled here.

Re use of samples in early experimental music, you can read a bit more about the ‘Music Concrete’ movement from which this idea comes on Wikipedia.

As I hinted here, the idea of Hip Hop having a specific birthday is a bit of an odd one. Back in 2013, there was a lot of press (both music press and mainstream media) around ‘Hip Hop’s 40th Birthday’, referring back to the famed party at the Sedgwick Avenue rec room where Hip Hop is said to have had its inception. Common sense dictates that a genre isn’t simply born out of thin air and there was of course an active DJ scene in the city prior to that date. There’s still a degree of debate as to which DJs did what first and how influential each was in their own neighbourhoods. ‘Founding Fathers: The Untold Story of Hip Hop’ is a documentary which goes some way in outlining the contributions of DJs active in the period prior to the Sedgwick jam. A certain amount of controversy / debate continues regarding the suggestion that some DJs were experimenting with the techniques for which Herc is generally credited before 1973. A discussion I had about this elsewhere pointed me to Michael Wayne’s Youtube channel which contains many interviews with active DJs from the time and of particular relevance in this context is this interview with Cholly Rock which counters some of the opinions offered in the Founding Fathers film. The specifics of which DJs attempted what techniques first aside, what is universally agreed upon is that the advent of DJs extending breaks via use of two copies of a record was a fundamental turning point in the creation of Hip Hop as a cultural movement.

This record has been sampled over 1,400 times. Explore the connections on WhoSampled here.

Grandmaster Flash’s exact contribution is also a source of a certain amount of debate. He’s frequently credited with the creation / invention of the crossfader. As I mention in the video, equipment with this type of capability did exist at the time, so a less romanticized and perhaps more realistic version of the story is that he was pioneering in his adoption and use of this technology rather than creation of it. Another video from Michael Wayne’s Youtube channel looks at some of the specific equipment available at the time and tends to support that idea.

9:55 Grand Wizard Theodore and the Scratch

The image shown here (added by the school’s editors rather than from my slides) is actually a DJ Tony Tone, a picture taken in 1981 and often mistaken for Theodore online because of the early ‘scratch’ pose. You can watch Theodore tell the story of the scratch in his own words here.

Sampled over 260 times – check out listings on WhoSampled.

Sampled over 480 times – check out listings on WhoSampled.

Explore all of the records sampled in the making of this track here. Interesting interview with Hank Shocklee about the process behind these records here.

Listen to the Donald Byrd track in full together with the 30 or so tracks to have sampled it.

Listen to the track in full alongside the constituent samples here.

Listen to the two tracks referred to here.

29:08 The Amen Break – most sampled record of all time

Listen and explore over 2,500 connections here.

Listen to the two tracks referred to here.

31:35 Most Influential: The Beatles and James Brown

Check out charts of the most sampled artists and most covered artists of all time.

Check out a chart of the ‘most connected’ sample based DJs and producers.

Listen to both tracks here.